The planet and it's oceans are affected by the gravitational  pull from the sun and the moon, but not small items on the surface,  or the atmosphere, which varies little in height as the planet rotates.
If a person on the equator weighs himself at midday, when the moon is also high in the sky, he should be somewhat lighter than when he weighs himself again 12 hours later, when he is subjected to the combined gravitational pull of all 3 celestial bodies from the opposite direction.
Centrifugal force should also affect the weight of a person at various locations. On the equator, which is rotating at 1000 MPH, he should be a little lighter than at the polar regions where the rotational speed is negligible. However a persons weight remains virtually the same no matter where he is, if we disregard small known discrepancies due to the flattening of the globe at the polar regions
A plumb-bob should also be affected by centrifugal force  particularly in the areas about 45 degrees north and south, and more so when the sun and moon are both high in the sky.
Why do none of these things occur ? 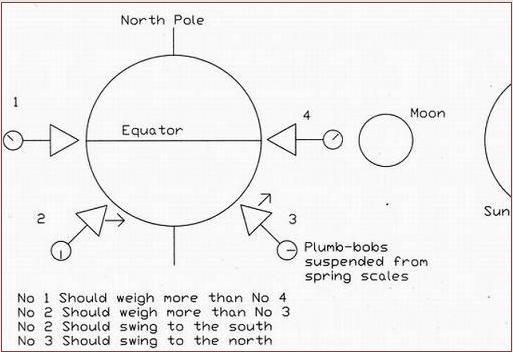