Some planets are probably ejected equatorially from their Sun or star, or another planet. The only reference we have are  Imanuel Velikovsky books. He describes a recent event where Venus created havoc in the Solar System, after being ejected as a comet from Jupiter several thousand years ago. There are many legends related to this. It may also be possible that Venus was a satellite hidden beneath the gas cloud. Or it could have come from behind Jupiter unseen and then emerged through the gas cloud. I find it difficult to believe that a planet the size of Venus could be literally dragged out of another planet without destroying one or both. There may be a more likely explanation. This is for the orderly creation of multiple planets and stars during the same period.

A new planet will settle into an orbit around the star, probably in a molten state,where the distance is determined by the mass and the velocity, and perhaps electrical charge interactions with other planets.

The new planet will assume the shape of a sphere gravitationally, with metals (probably iron) attracted to, or formed, at the inner core.
The new planet will not be rotating initially, but may be locked to always  face another planet or it's star. (Venus is locked to face Earth at closest approach).

Gasses will form an atmosphere, and at high altitude these gasses will begin to rotate at high speed equatorially in the normal direction of rotation. (Venus does this.)
This rotation is probably a Faraday Disc Motor and is driven by the plasma electrical outflow equatorially from the planet.

The electrical input arrives from the Sun via counter rotating plasma sheaths at the polar regions, (seen sometimes as Aurora), and swirls through molten non magnetic highly conductive metal outer core, (copper, gold, silver, aluminum etc), creating an enormous electromagnet from the (probably) solid iron core. The input may be pulsing at about 7.83Hz, the Schumann Resonance, but the pulsing may also be caused by some other means associated with Earth's unique characteristics, to enable a unique signature.

The surface starts to cool and solidify. Gradually the iron core  electromagnet will use the solid crustal magnetic rock to form a flux path allowing the formation of an internally focused  and concentrated magnetic field in the mantle area.

Lightning will be produced in the clouds, and this will slowly alter the atmospheric chemical composition to create a livable atmosphere, and water vapor.

At this stage the planet will be like Venus, rotating slowly or not at all. The gravity will be proportionate to our non rotating Moon, but disproportionate to the Earth's present day gravity. This is Static Gravity, derived only from mass, and dinosaurs could possibly thrive in these conditions.

At some point the solid rock crust will very slowly start to rotate, and this will be caused by the same means as the atmospheric wind.

As the planet's crust rotates, the internal electromagnet remains stationary, perhaps locked to the Sun's core rotation. The differential in speed between the electromagnetic field and the rotating crust and mantle means that the entire crust and all of the molten mantle area are being swept by a huge and super powerful pulsing electromagnetic field. Any non magnetic, highly conductive metals swept by this field will at some speed create the huge magnetosphere, and also the ionosphere.  This field is a Dynamic Gravitational Field, but is known and used practically as Electrodynamic Suspension or Electrodynamic Braking. Drag associated with this field creation may ensure the area remains in a molten state.

The ionosphere will create a secondary light source as it interacts with the Sun's rotating field. This light will be blue and may create more illumination than that directly from the Sun. These huge, possibly infinite fields, are Dynamic Gravitational Fields, and are most likely created and propagate instantaneously. This DGF will sense and interact with all similar fields, at a frequency we call the Schumann Resonance. I believe we may be in error when we call these fields a magnetic field. I suggest that the magnetism they contain is information, and they would also contain a copy of all electromagnetic information, including light, and transmit this to the universe.

This DGF emerges from the surface at the surface rotational velocity. The Planetary magnetic field, while virtually stationary, would be sweeping us at about 1000MPH at the equator.

The ionosphere creates a graduated charge differential between the surface and ionosphere, and this creates the gravitational force we feel. This force is derived from the planetary rotational speed and the strength of the internal electromagnet. In the case of Earth this Dynamic Gravity exceeds and overrides the original Static Gravity. I suggest that the dinosaurs lived on Earth at a time before the planet's rotation began,  or when rotation was minimal.

The suggestion that Schumann Resonance  is caused by lightning strokes is unlikely to be correct. It is more likely the other way around. It is also likely that if our DGF is the result of Solar electrical plasma input, then any climatic changes associated with Sun Spot variations may be attributed to Ionospheric disturbance from within the planet.

I also suggest that the "Goldilocks Zone" idea for habitable planets is incorrect. Any rotating planet with the required fields would be illuminated and heated by it's ionosphere. This would work because Saturn, for example, although 10 times further from the Sun than Earth, would be swept by the Sun's rotating DGF at 10 times the speed that Earth is swept.
Earth about 1 million KPH, Saturn about 10 million KPH. 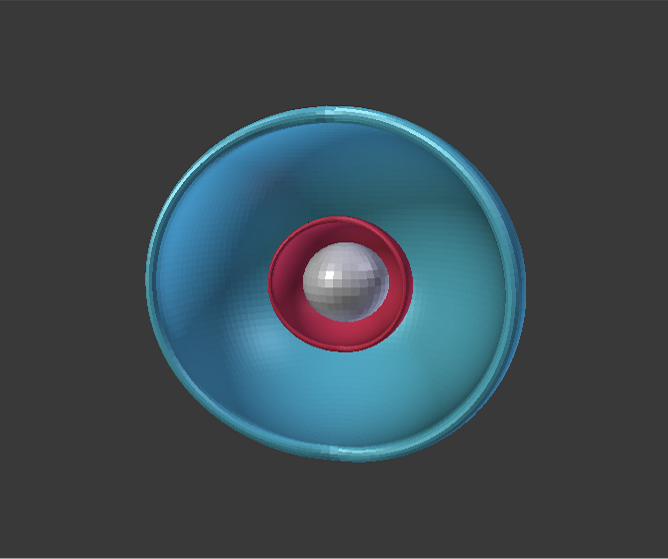 The Blue Earth cutaway. The Inner Core is Grey and is magnetic, probably
mainly Iron. The Red Outer Core would be Copper or Aluminum. Both Cores
may be stationary or nearly so.

The Plasma sheaths are sometimes visible. They are the Northern and Southern Lights. 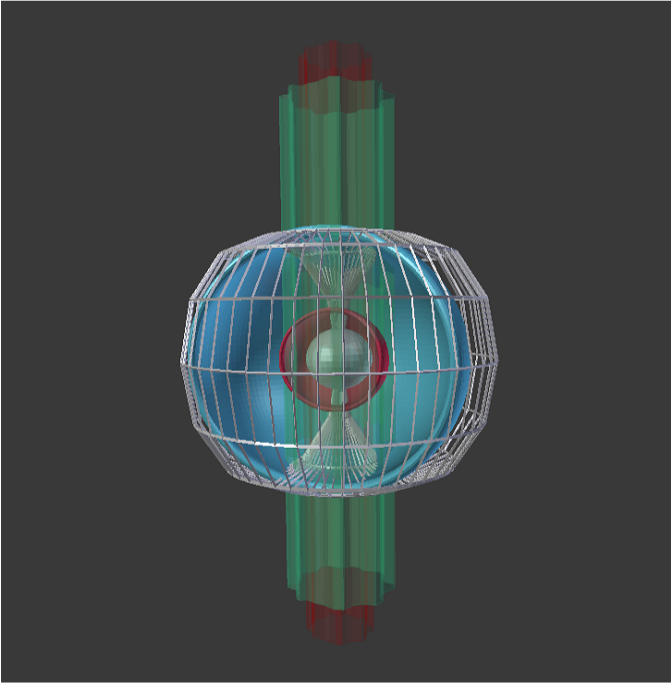 The Magnetic Flux finds a path through the polar regions and then uses the magnetic rock and minerals of the crust to create a planetary size stationary electro magnetic field which is concentrated and focused into the rotating Mantle. This is the probable origin of the inward acting force we call gravity. 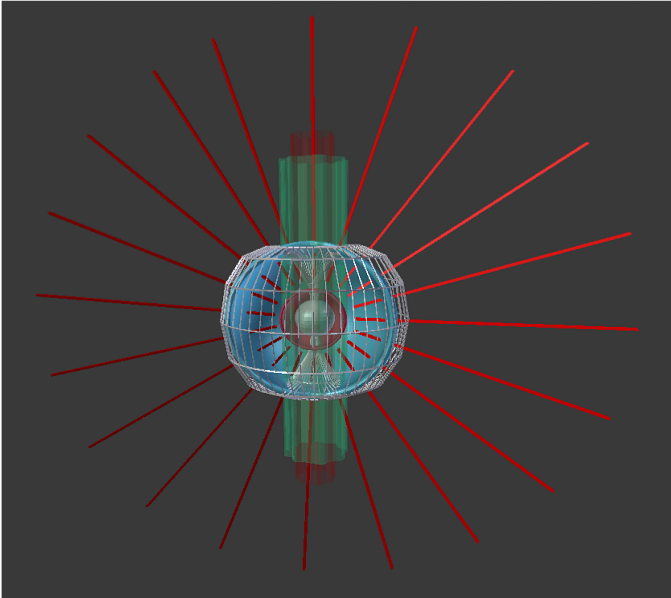 The stationary electro magnetic field passes through the rotating (probably liquid) non magnetic conducting metal mantle, (copper, aluminum, etc), and solid non conducting metals and ores in the crust. This creates the huge outward acting field we describe as the Magnetosphere, but is a Dynamic Gravitational Field. This is the same as the field which is created when a magnet is dropped down a copper tube, and also Electro Dynamic Suspension as utilized in the Inductac train.

These Dynamic Gravitational Fields emanate from all rotating celestial bodies. They extend to, and interact with all others in the vicinity. They fill all of space.

They are The Elephant In The Room which we choose to ignore.

Richard Bentley was a younger contemporary of Isaac Newton. After    Newton had formulated his law of gravitation, he observed, in a letter to Richard Bentley, that if all the stars are drawn to each other by gravitation, they should collapse into a single point. One will be drawn to another; that star will grow and pull in still more and more. In time, everything must be drawn in. "According to Newton, each star in the universe ought to be attracted towards every other star. They should not remain motionless, at a constant distance from each other, but should all fall together to some central point. Newton admitted as much in a letter to Richard Bentley, a leading Cambridge philosopher of the time."[1] Newton solved the paradox by claiming that God prevented the collapse by making "constant minute corrections". Though Newton's explanation was rather unsatisfactory from a cosmological aspect, Bentley's paradox could prove to be the reason behind the "Big Crunch", the opposite phenomenon of the "Big Bang".

Newton attributed a force called God to ensure that the celestial bodies did not all fall to a single point.

Science uses a "G" to denote the "gravitational constant" of the force of attraction between 2 masses. As there is some confusion I have noted on the diagram above.

G (in)   to denote the attracting inward force and
G (od)  to denote an outward directed force.

The Dynamic Gravitational Field I describe in these pages is the outward acting force making "constant minute corrections". The G (od) force or field. Hidden in plain sight. Everywhere.